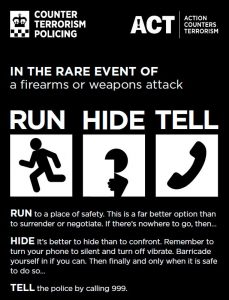 In the UK the Police Service and partners work very hard to keep us safe from the threat of gun crime.

Firearms and weapons attacks are thankfully extremely rare, but we must always know what to do to stay safe.

Attacks in the UK and abroad remind us all of the terrorist threat we face. Police and security agencies are working tirelessly to protect the public but it is also important that communities remain vigilant and aware of how to protect themselves if the need arises.  Atrocities in London and Manchester have also sadly resulted in some of the youngest victims of terror this country has ever seen, and if we are able to teach children to act in a way which could potentially save their lives – then it is our responsibility to do so.

What would you do if you came under fire or heard gunshots at work or in public?

Should you stay and hide, or run for the nearest exit?

Would you know what to do to stay safe?

National Counter Terrorism policing is providing advice to the public on the steps they can take to keep themselves safe in the rare event of a firearms or weapons attack.

The police service has released a number of short public information films, which set out the key options for keeping safe should the worst happen.

You can watch the films by following the links below: